In observance of Independence Day, the library is closed from Saturday, July 2 through Monday, July 4. We will reopen Tuesday, July 5 at 9:00 am.

The Howell Carnegie Library, in partnership with the Howell Public Schools is pleased to display artwork from students in the Youth Services Department of the library. Displays are scheduled to change every month during the school year.

The Howell Carnegie Library, in partnership with the Livingston Fine Art Association, is pleased to display artwork from 2 local artists in the East and West Wings of the library.  Displays are scheduled to change every other month.

Hover over image to view more information about the artwork.

“Color is what originally drew me to painting. I began with oils, tried acrylics, but when I discovered watercolor, I was hooked! I paint what I like to look at! Most of my ideas for paintings come from photos taken by myself, family or friends. I find it pleasing to paint everyday people, places and things. I love finding a new subject to work on, drawing and erasing, all the while thinking of those colors I’ll get to “play” with! Then, I finish by using a frame to capture my visual memory! I hope you enjoy these pieces as much as I enjoyed creating them. My goal is simply to entertain you with color. I am continuing to develop my watercolor artistic style by attending watercolor workshops and classes. I am a member of the LFAA and serve on their board.”
Ms. Gray’s work can be found in the East Wing of the Library for the months of May and June 2022.

“I have been painting for 21 years now. I like to do acrylics since the colors are so bright and happy. You can also paint over your mistakes with it. Pastels are very fun for me since I like to draw and it serves as a drawing for me. Plus, pastels on black paper can be exciting and sometimes very mysterious. Watercolor is so fun since it flows and mixes beautifully (most of the time). I don’t use oils since they used to give me headaches. But now, since they can be odorless, I am too cheap to put more money into buying them. I also paint different subjects since I get bored doing the same things. Portraits are the hardest and take the longest. I am so glad I chose to paint. I never get bored and sometimes, I like my work.”

Ms. Spears’ work can be found in the West Wing of the Library for the months of May and June 2022.

The Howell Carnegie District Library is home to several pieces of artwork.  The various statuary pays tribute to those individuals who have made a lasting impact at the library.  We hope you take time to walk around the library grounds and enjoy the ‘Art on Display’

Hover over image to view more information about the artwork.

In 2010, a bronze statue at the base of the front steps of the library depicting two children sitting on a bench enjoying an open book was dedicated to Martha McKenzie.  Martha was a long time librarian and friend to all who visited the library.

McKenzie, who died of cancer in 2008, became involved with the library through the Friends group before becoming a paid staff member in 1985.

The statue in front of the library was paid for entirely through donations from those in the community who were personally touched by McKenzie’s dedication and service.

Boy and Girl Under Umbrella

The original library statue of a little boy and girl holding an umbrella, was given to the Howell Carnegie Library during the First World War, by the Howell Women’s Club.  Cast in Zinc and installed in the center of a medium sized ground basin.

The statue adorned the lawn until 1981, when it was replaced because of damage, by a replica. 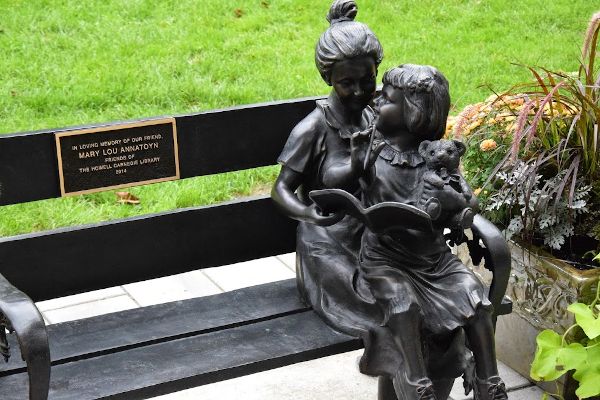 In 2014, a bronze statue on the east side of the library’s lower level, was dedicated to Mary Lou Annatoyn.

Mary Lou Annatoyn was an advocate for children and a member of the Friends of the Howell Carnegie Library from 1981 until 2008.

The statue  was paid for entirely through donations from those in the community who were personally touched by Mary Lou.

In 2018, a bronze statue of Duane Zemper was dedicated on the  southeast corner of the library grounds.

He was a decorated World War II veteran, a professional photographer in the Howell area for nearly 50 years, an active volunteer with the Howell Area Archives and a Howell Rotarian.

The Duane Zemper Legacy Project committee is a collaboration of the Howell Rotary, The Howell Carnegie District Library and the Howell Area Chamber of Commerce Foundation.  The group was formed to memorialize the enormous contribution to Howell by the man fondly known as “Zemp.”

Many say his “feet” carried him out of a life of poverty and to our community which he called home.

At Flint High School, he found hurdles were not fences and running meant winning. Lloyd W. Olds, track and field coach at Michigan Normal College recognized his potential and recruited him. With no money for college, his high school coach was his benefactor, giving Duane the thirty-five dollars needed for tuition to attend college.

At Michigan Normal, Duane was the Huron’s second All-American in cross country, one of only two men to ever win the State of Michigan AAU and Collegiate Championships in a single year.

Working every odd job imaginable to complete college, Duane Zemper graduated with a degree in physics, mathematics and chemistry, as a seven-time state champion and four time All-American in cross country and track and field. Again his feet carried him forward.

In 1942, he enlisted in the Army Air Corps and served our nation as a Aerial Reconnaissance Officer. At the end of the war with great forethought, 1st Lieutenant Zemper preserved more than ten thousand war photographs, each one telling an amazing story.

Returning from the war, Duane settled in his wife’s hometown of Howell and he adopted it as his own.

Using the skills learned in the Army, he became a professional photographer and served this community for nearly fifty years. The historical photographs you see of Howell’s early years are here for our pleasure because Duane knew the importance of preserving the glass plate negatives and photographs that had been left behind by the previous owners when he  purchased his studio overlooking the Court House. He continued the preservation process of our history throughout his career.

Named 1976 Citizen of the Year by the Chamber of Commerce, the City of Howell declared June 9th “Duane L Zemper Day”.

As a Rotarian he was proud of his nearly 68 years of perfect attendance.

He co-founded the Howell Area Archives, in the Howell Carnegie District Library and was a major contributor and co-author of the treasured 1776 -1976 Howell Bicentennial History Book. The “Duane Zemper Award” is given by the Howell library to those individuals who bring positive attention and extraordinary support to the library.

Even a man from humble beginnings can inspire a community. As an Athlete, Professor, Veteran, Photographer, Preservationist, Historian, Storyteller, Coach, Mentor, Booster, Rotarian, Teacher and Friend, he is woven into the fabric of our history and into the hearts of everyone who lives here.

He spent most of his life collecting and passing on the stories of our Howell community and those who lived here.

As he often said, “Everyone has a story, What’s yours?”